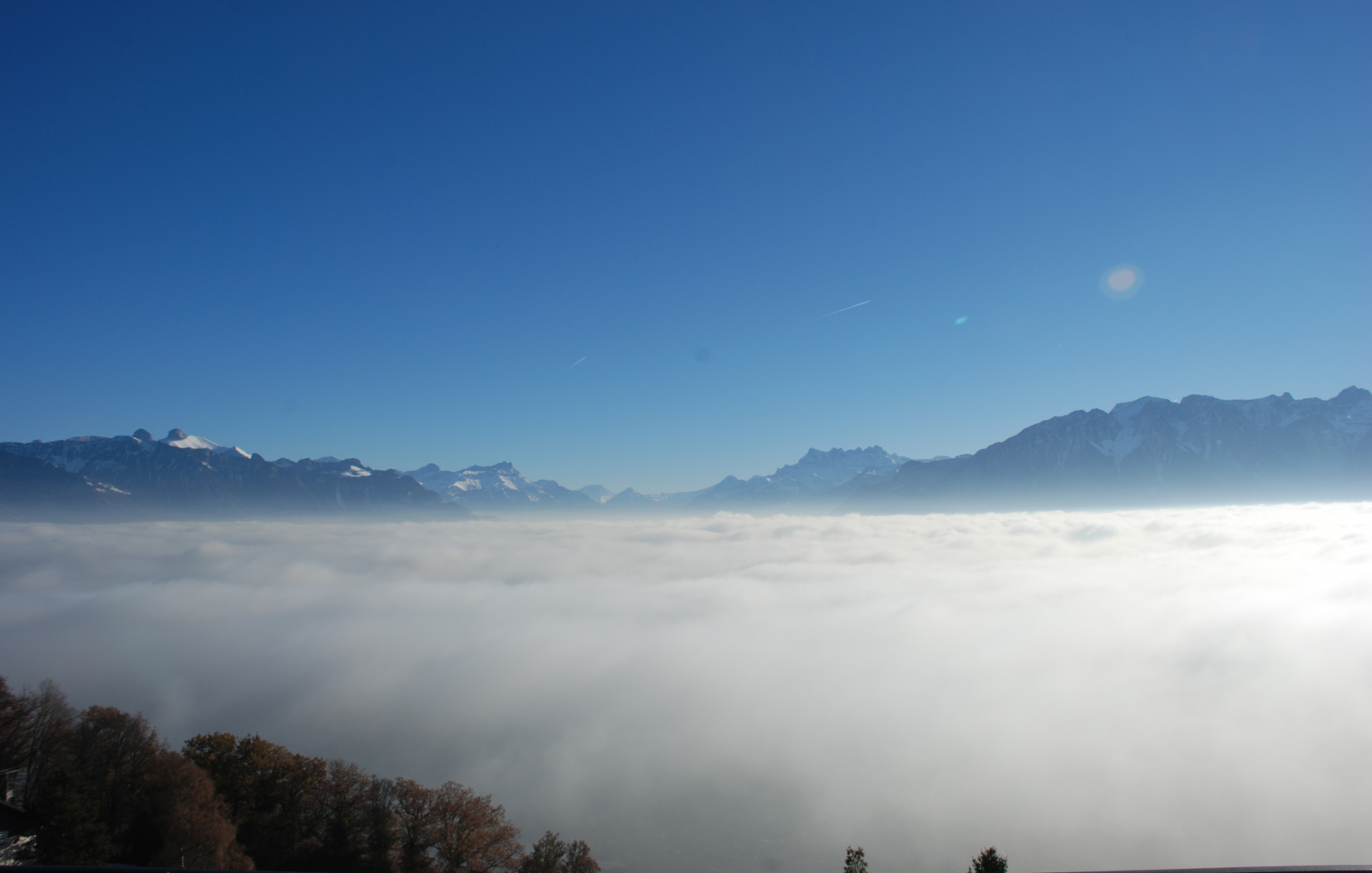 The architect J.-H.Collombet makes effort to prevent it from looking like a cold hospital, as the building of Le Mon Repos was meant to welcome patients suffering from neurodegenerative diseases.

In 1934, Maurice Ravel, the famous French composer, stayed at Mon Repos Medical Centre. As if to continue a musical tradition on Mont-Pèlerin, the French contemporary composer Henri Dutilleux also stayed at Le Mirador. He greatly appreciated the calm and the beauty of the site, which inspired him for his compositions.

After the nuns and the doctors closed and left the Mon Repos in 1942, a couple named Métrailler maintained the building.

The Mon Repos is put up for sale and bought by André Kurz, brother of an architect of Vevey, in 1950. The building was completely renovated and operated as a hotel. In 1962, the Ceranini-Besse family bought the property and transformed it over the years.

In 1969, an American Entrepreneur, Joseph Segel, fell in love with the area while visiting Switzerland with his wife Doris. He buys the hotel and renames it the hotel Le Mirador in 1970. Famous politicians and international leaders began staying at Le Mirador and in 1971, the hotel was selected for the official visit of Emperor and Empress of Japan.

In 1971, the famous American Harvard Business School launched a European programme. Switzerland was identified as a location easily accessible from all over the old continent. The University Dean immediately falls in love with Le Mirador and its ideal location far from any distraction. Famous Harvard Professors (Abell, Gabarro, Hayes, Jack Kennedy, Milton Brown) as well as Professor Jean-Claude Larréché, with INSEAD back then, began delivering their prestigious courses at Le Mirador. Professor Larréché remembers, "The top managers of the top international companies were at Le Mirador: Digital, Hewlett Packard, Oracle, Ciba-Geigy, the top bankers too." Other companies such as General Motors, General Electric, IBM soon began patronizing the hotel and its conference center. In 1983, Harvard Business School decided to terminate its European programme.

Founded in 1974, Le Mirador Country Club was originally an exclusive international club offering a home away from home to expatriates or foreigners in Switzerland. Today, the 200 members of the now “Club&Spa” still benefit from exclusive advantages at Le Mirador Resort & Spa, and meet each year at the member Cocktail organized by the hotel.

After he bought Le Mon Repos, Joseph Segel decided to add each year a new feature or service to the Hotel. Starting in 1974, Le Mirador offers an exercise and a massage room, a swimming pool covered with a Plexiglas dome.

In 1990, Joseph Segel sold Le Mirador to the Japanese company Mariya. In 1993, Segel, who had never stopped coming to Le Mirador during his summer vacations, decided to buy Le Mirador back. To rejuvenate the property, he imposed major renovations during the winter of 1993 to 1994. At this point, the success of the hotel seemed to be unstoppable. The hotel is accepted as a member of the prestigious Leading Hotels of the World chain for the 1995 directory. In the summer of 1995, a temporary exhibition of the famous bronze statues by American Sculptor J. Seward Johnson on the grounds of the property was held.

On November 1st, 1998, Le Mirador became the first non-smoking Hotel of the Leading Hotels of the World and in Europe. To complement this, the hotel proposed medical tobacco detoxification cures. However, the hotel immediately lost its best patrons for meetings and conferences and could not compensate with enough American tourists in need of pure alpine air. Six months after its launch, the project was abandoned. Joseph Segel analyzed this failure, “We were probably ahead of our time !”

In 1998, the German Hartmut Lademacher becomes the new owner of the hotel. The Spa trend gaining popularity in Europe. Le Mirador had probably been ahead of its time in the 80's with its Spa but entering the 21st century, it was time to redefine the concept. From 1999 to 2002, the Health Center Clinique Lémana offered its specialized revitalizing therapy Cellvital at Le Mirador. In 2003, Le Mirador Spa became the only Givenchy Spa in Switzerland. Also in 2003, the Swiss Anti-age Group joined Le Mirador, replacing the Clinique. Additionally, the fitness area of the Hotel has been successfully renovated in 2003.

On January 1st, 2003, Le Mirador became Le Mirador Kempinski after a management contract was signed with Kempinski Hotels & Resort. In 2004, important renovations took place with the extension project in mind. The building was extended by 6 meters, allowing the creation of an enhanced Fitness center and of a larger banquet room for up to 350 people. In 2009, a new wing is built. Le Mirador closes for some months to renovate the historic building and create the new reception, 45 Junior Suites and new break out rooms (Chardonne). 2015: Le Mirador Resort & Spa signs the end of its management contract with the Kempinski group. The hotel is independent again.